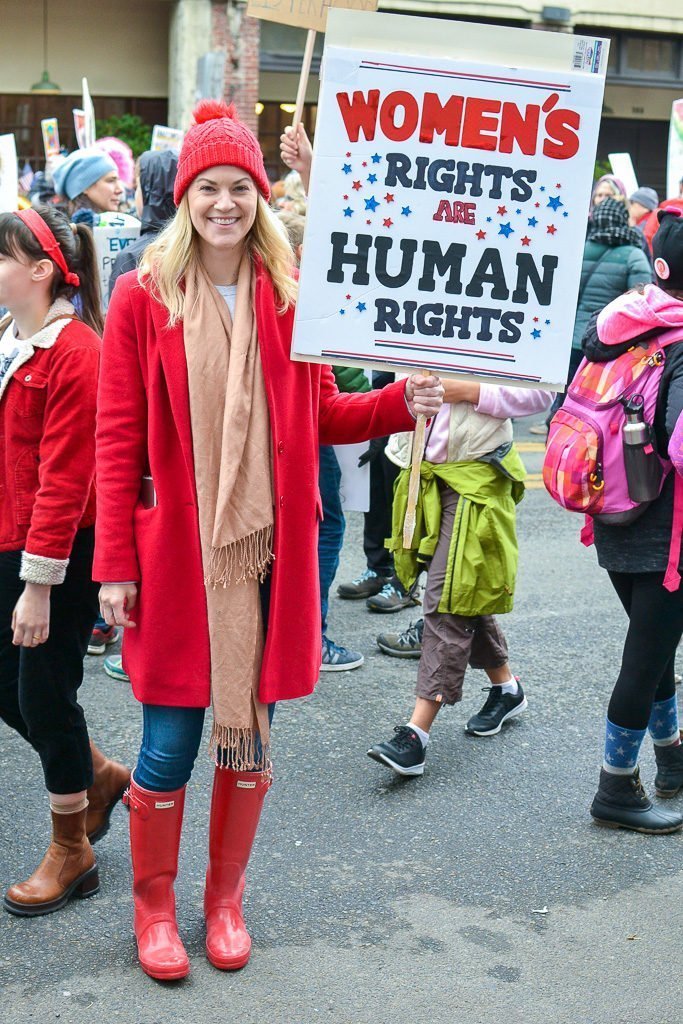 But this year I was excited to attend! I spent Saturday marching with over 100,000 women and allies. I really wanted to share my experience with you guys and why this march was so important to attend and to be part of for me. 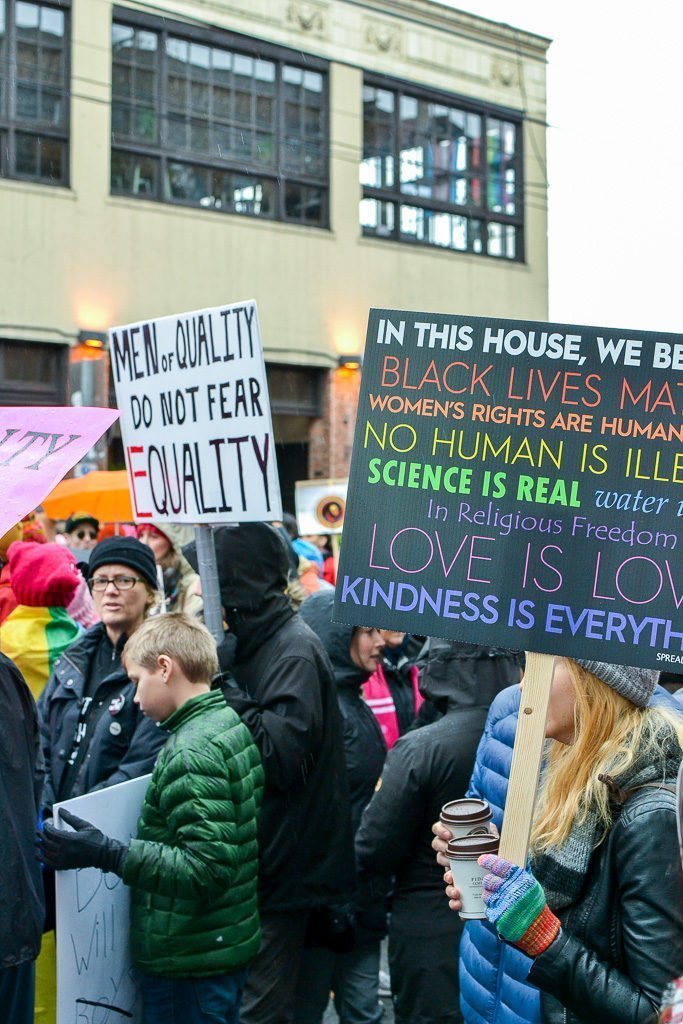 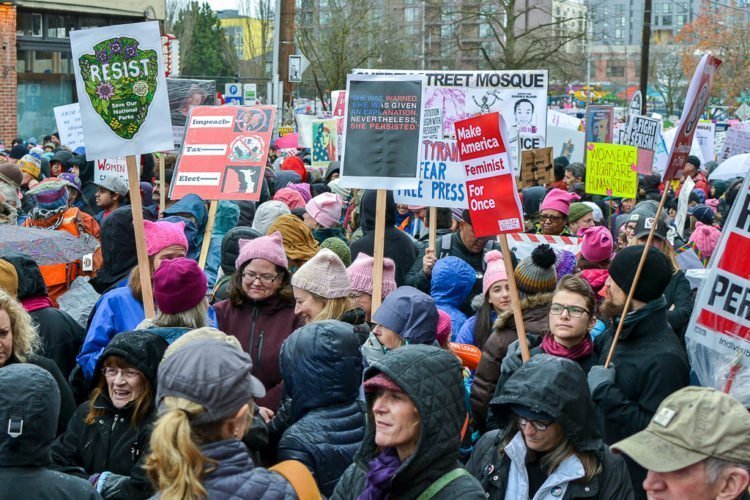 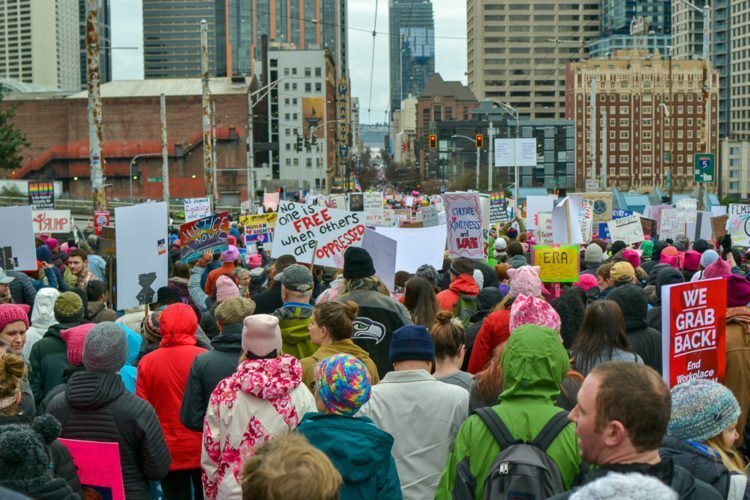 What is the Women’s March?

The Women’s March was a worldwide protest which started on January 21, 2017, to advocate legislation and policies regarding human rights and other issues, including women’s rights, immigration reform, healthcare reform, reproductive rights, the natural environment, LGBTQ rights, racial equality, freedom of religion, and workers’ rights. This movement has continued in 2018 with a large push to elect more women into office and encourage people to register to vote. 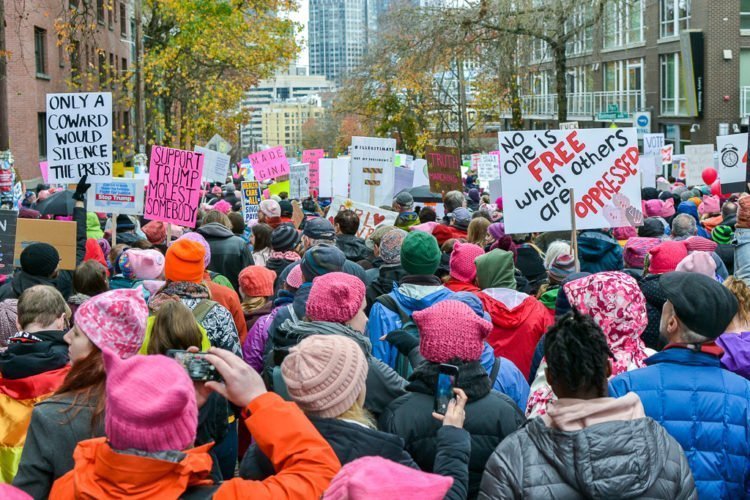 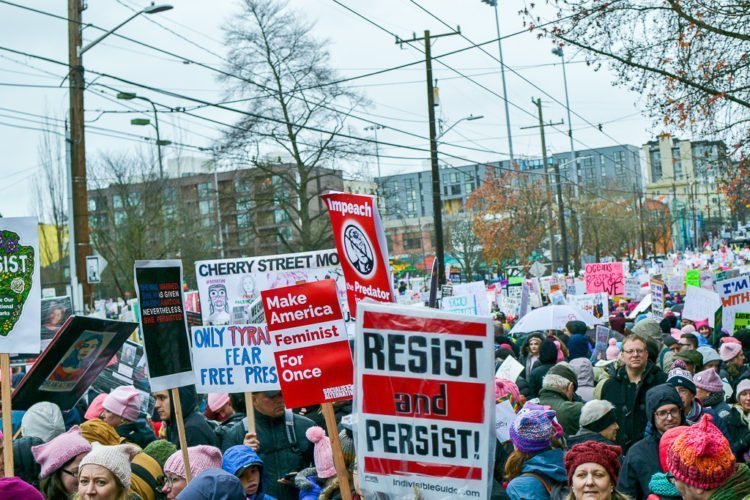 Why is this so important?

This march is the opportunity for people to come together collectively to have a voice about our rights, our healthcare and the values they feel are not being prioritized by those in office. It’s an opportunity for people to participate in their civic duty and feel heard about their concerns with the direction of the country. The only way we can impact change is to challenge the status quo – and embrace the idea that all of us are created equal. 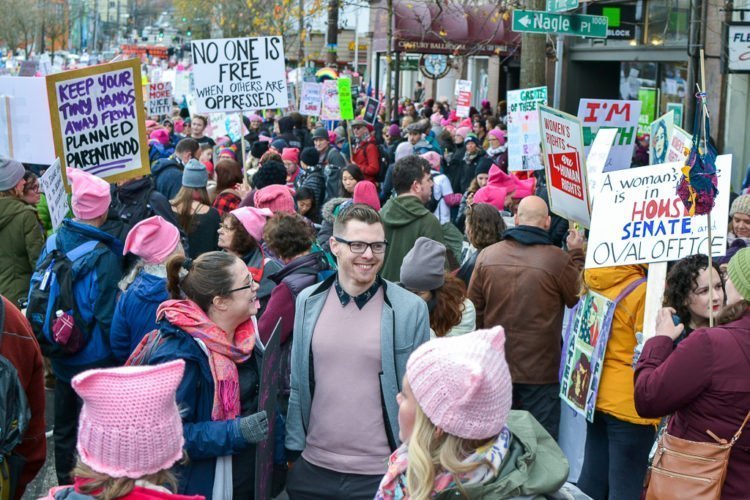 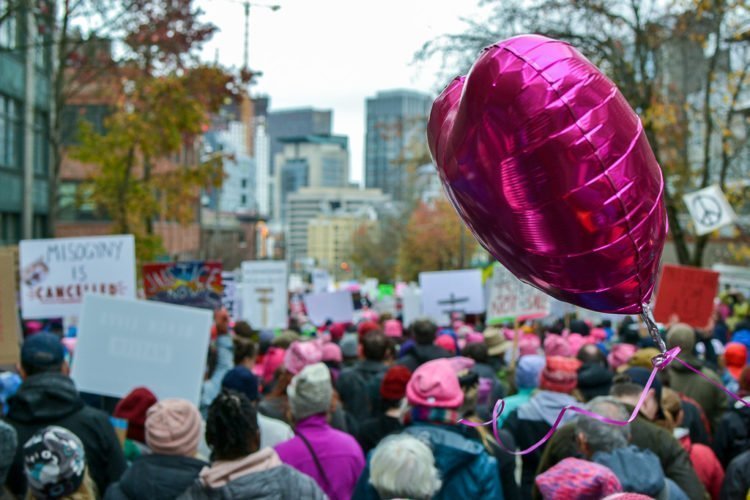 WHY ARE PEOPLE MARCHING

The best part of the march was everyone was there for a different reason but thoroughly united in one cause: equality and representation.  This march is about giving voice to those who have been silenced or frozen out from the system. That is why this march matters  – it’s giving a voice to those who feel marginalized.

This march is a massive public demonstration about the values and the policies of our county. This is a march about all women and especially the overlooked women of color, indigenous women, and minority women. I saw people marching and signs in support of Indigenous Women, Black Live Matter, LGBT, Sexual Assault Victims, People with Disabilities, Equal Pay for Equal Work, Healthcare rights, Women’s Rights, Planned Parenthood, Civil Rights, Human Rights, Paid Leave and Abortion Rights.

Women and allies of women came together on Saturday to advocate for change against the constant double standard.  Women live with a double standard that impacts how we are paid, how we are treated, how we are taxed for products and even rights over our own bodies. The double standard is woven into every aspect of our lives and we aren’t having it anymore.  So women are marching for their voice to be heard and to protect their rights. 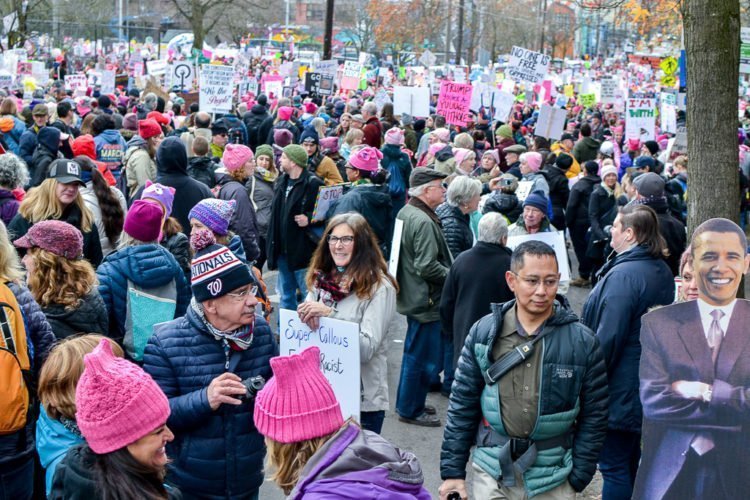 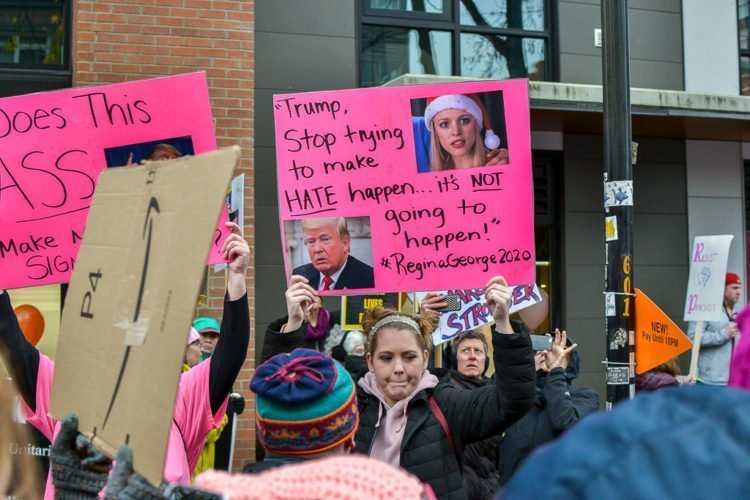 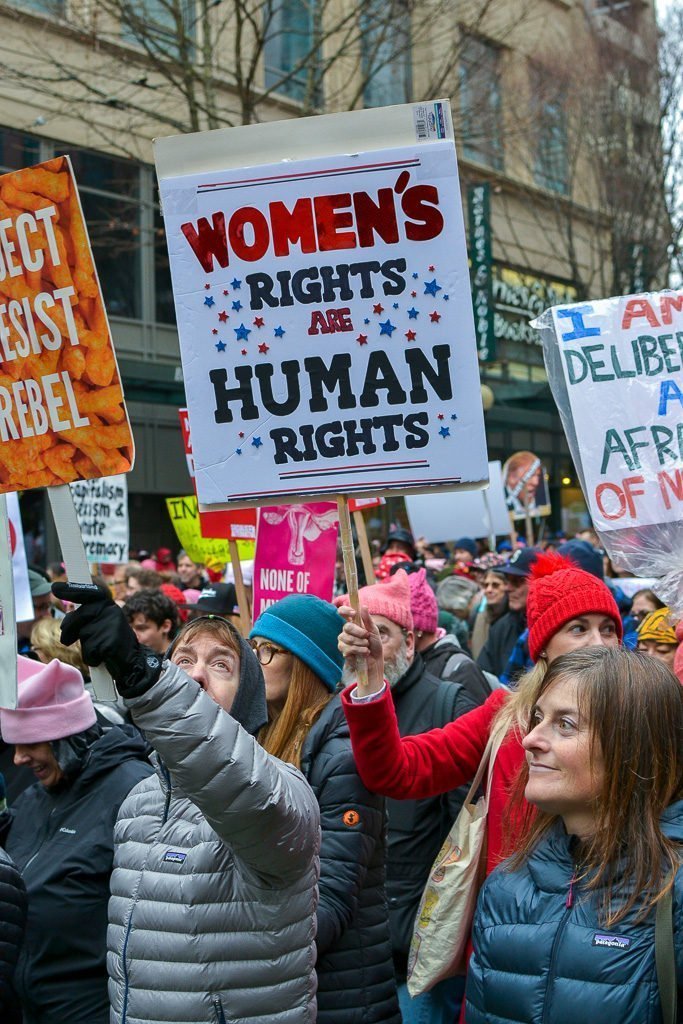 WHY I WENT TO THE MARCH

History is happening right in front of us and I want to be an active participant. I want my voice heard. I am frustated and concerned with the direction our country has taken. I went to this march because I felt I needed to do more than just complain or share an article on twitter. If I want to impact real change I need to get involved. So I marched and wore red in support of Indigenous Women who lead the Seattle Women’s March. 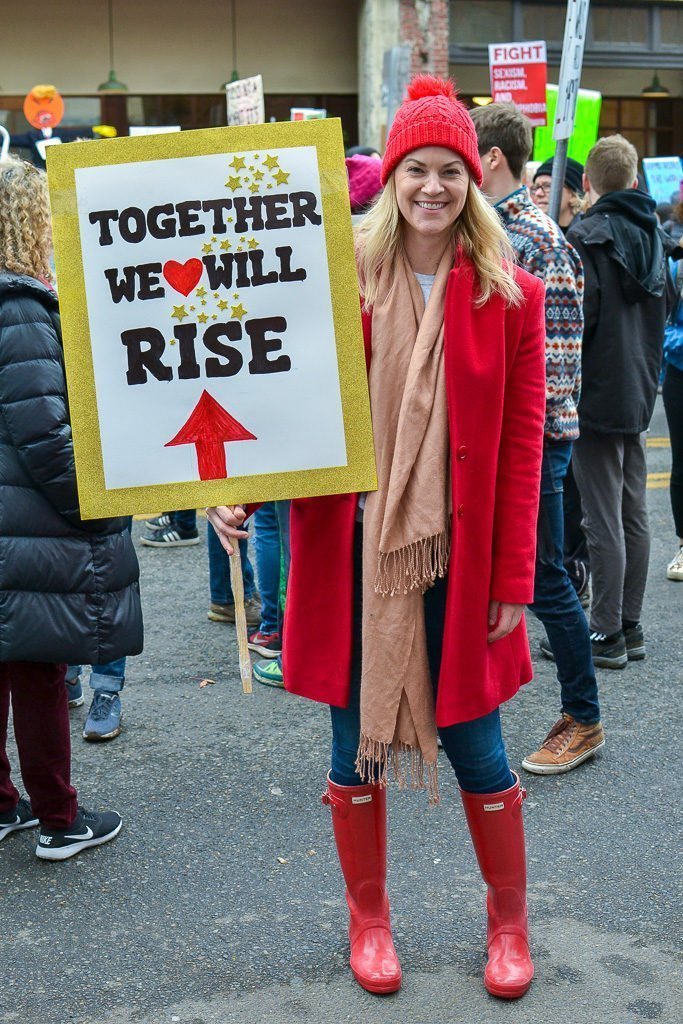 I marched because I am frustrated with the status-quo. I am frustrated that women have to work 2.5  times harder to be recognized for the same achievements as men.  I have been discriminated against, sexually harassed, demeaned and paid less because of my gender. I march because it’s 2018 and I am paid 80 cents for every dollar my white male counterpart makes. The numbers are even worse for African-American and Hispanic women earning  59 and 65 cents compared to the dollar earned by a male counterpart. I march because while women make-up 50% of the population we only have 23% representation in government – and representation matters. It matters women are in these offices and meetings as policy and healthcare decisions are being made. It matters that women are part of the conversations. It’s time that woman lead those conversations. 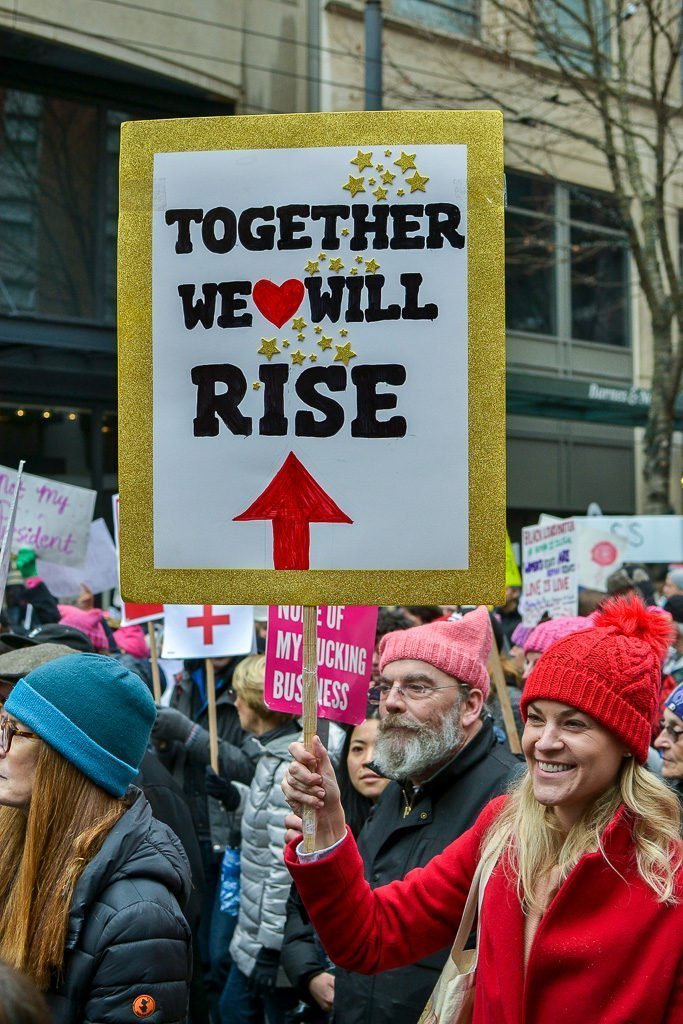 I choose the wording of my signs very deliberately because while many focused on Trumps or the GOP, and as funny as those signs are – for me this is bigger than one party or one individual.  We have found our voice and I really want to focus on the positivity of that – that we are all united. I also want to call out that  I am very aware marching is a privilege that many are not able to do because they have to work or have no childcare options. 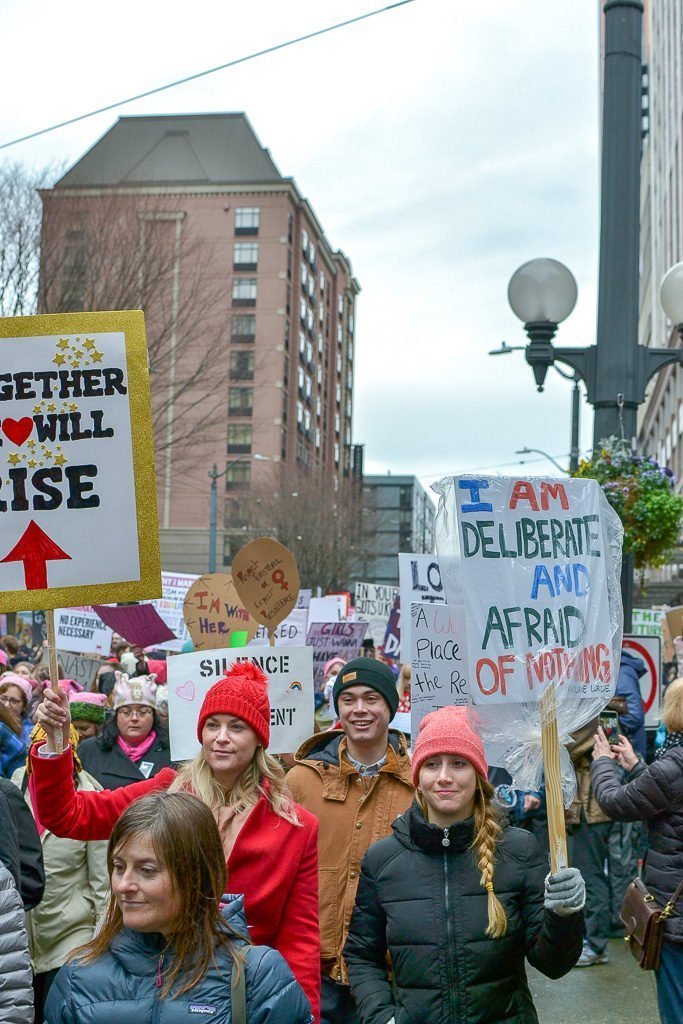 What’s Next for the Women’s March?

This isn’t a flash in the pain movement – this is about transformative change at every level of the government so that 50% of the current population is represented in policy creation and changes. Women’s March is focused on #PowertothePolls. They want people to get out and register to vote in 2018. 2018 will be a big election year and a lot of opportunities to elect women and allies that understand promoting diversity and equality. Get Her Elected and She Should Run are new organizations focused on getting women elected to positions of leadership. No matter what cause you feel passionate about I urge you to get out, get active and vote!

Did you go to the Women’s March?? What motivated you to attend??

Share your experience with me below in the comments↓